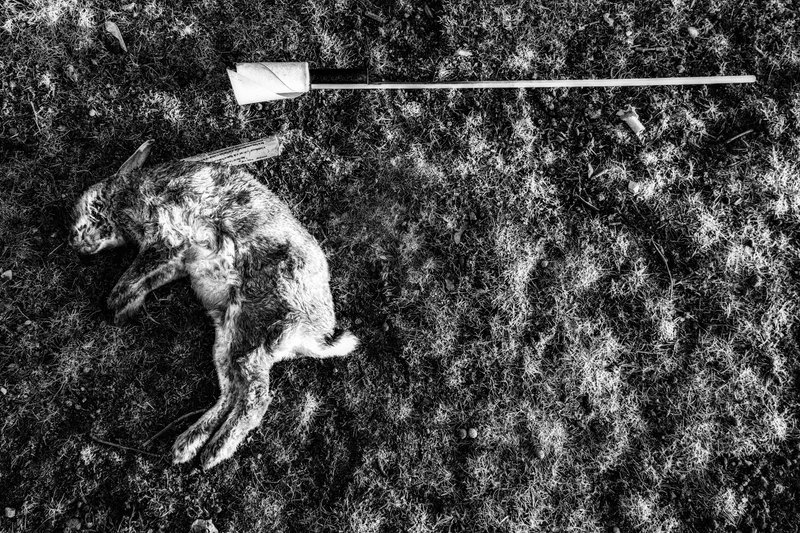 What happened to the rabbit?

With this question Tanja Pinkert welcomed visitors to the exhibition “Sprachbilder/Bildsprachen – Text trifft Fotografie” (Language Images/Pictorial Languages – Text Meets Photography) in Berlin on 14 July 2015, an art project by the documentary photographers Hilli Zenker, Peter Zenker and Thomas Klingberg together with the Berlin artist Petrus Akkordeon, who interpreted a selection of documentary black-and-white photographs textually in the form of poems. In order to be able to give even more expression to his lyrical interpretations, Akkordeon did not simply “copy” the photographic originals, however, but subsequently visited the places where they were taken. In this way, thoughts and feelings that have no direct connection with the respective picture itself are also incorporated into the poems. The photographs contain scenes from the city of Berlin – marginal events, absurd, moving, sad, funny. Also portraits. Above all the thoughtful.

Church instead of gallery

The four artists have chosen the main hall of St. Peter’s Church in the Berlin district of Lichterfelde as their exhibition venue rather than a classical gallery. “On the one hand, we reach a much more diverse audience here, on the other hand, the embedding of the exhibits in this sacred environment seduces us to take a different approach and deal with the contents of the photographs and the texts, which deal with such topics as longing, death, loss, fear, envy, poverty or desire,” they all agree. The Church of St. Peter has long since ceased to be just a place for cultivating relationships with God. Jazz and blues concerts, art exhibitions and readings have been taking place here for a long time.

Why don’t you wake up my friend?

But back to the initial question: what happened to the rabbit? The author of this documentary photograph cannot answer the question of the fate of the lifeless creature on that New Year’s Eve 2010/2011 himself, only guess at it. Peter’s accordion let his thoughts flow and interpreted the work in his own poetic way.


Accordion intoned his lines so powerfully and gesticulously into the pulpit microphone of the neo-Gothic church of St. Peter that the small muscles on the hair follicles contracted all over your skin. The poet, illustrator and action artist read altogether 12 of his 26 poems. In the background, the accompanying photographic work was projected onto the wall using a beamer. Between the changes of images, an almost reverent silence prevailed in the wide church hall. No clearing of throat, no breathing, no pushing of chairs, no whispering could be heard. At the end of the performance, Peter’s accordion received the artist’s well-earned bread – a respectful, not pathetically exaggerated, appreciative and long lasting applause. The exhibition was opened.

“It’s a wonderful exhibition. If you missed the opening, you also missed the reading of the texts in the acoustics of the room! The effect of the pictures to the texts and the writing to the pictures is more than successful”, says photographer Jens Schulze from Berlin. There was also a lot of praise for the way the text-image-work pairs were presented. Petrus Akkordeon wrote all texts by hand in art type under the respective photograph. The plastic plates hung generously distributed throughout the church hall. The journalist and editor Heinz Pahlke: “I am already very impressed by the successful symbiosis of text and photography. The publisher and author Hendrik Liersch, Corvinus Presse: “How colourful life is, is conveyed by Petrus Accordion with his poems to the black and white photographs”. Berlin-based Susanne Schmidt spoke of an “artistic magic and power” emanating from the exhibits. A part of the hanging in the hall of St. Peter’s Church. Photo: Peter Zenker After the exhibition opening, Susanne Schmidt went to St. Peter’s Church for a second time to let the works of art take their effect in peace. She met two elderly gentlemen who were playing music in front of the altar, with crushers and mandolin. When at some point the paths of the three crossed in front of one of the exhibits, which had the theme of life and death, one of the men told the story of a Jewish girl who survived the war by tricking her into killing herself. “The men asked me to read them one of the poems, then we talked until the priest kindly threw us out of the church because a wedding was imminent.

Photographer Hilli Zenker sees this meeting as confirmation of the common idea of holding the exhibition in an open church. “Such encounters are hardly possible in a gallery.” Peter Zenker puts it in a nutshell: “Art must go where people are and not the other way round”.