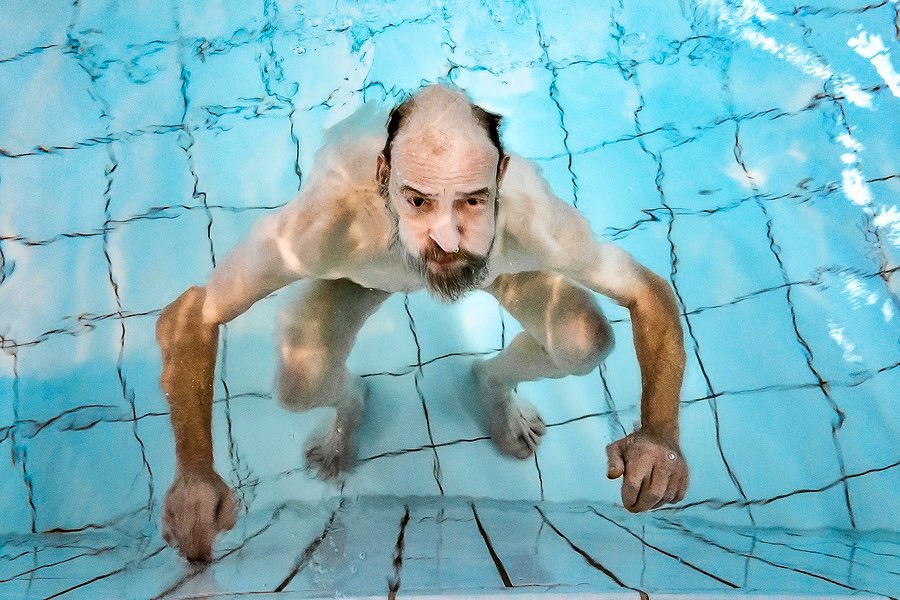 About breaks and new beginnings.
Documentary exhibition in photos and texts.

About beeing long-term unemployed and an existence in the welfare cosmos.
About social exclusion and esteem.
About material upcycling and personal upgrading.
About dignity, dreams and the art of breathing under water.

Disease. Strokes of fate. Psychosocial problems. Rationalization. Lack of educational opportunities. Digital revolution. Jobs without a future. People slide into unemployment for very different reasons. In public discourse, not being able to provide for one’s own livelihood in the German performance society often enough goes hand in hand with ostracism. The long-term unemployed in particular experience a high degree of stigmatisation and exclusion. As a result, they suffer particularly from hardly participating in social life or not participating at all.

“You better stay a welfare recipient, live off my tax money, lie on the couch, get drunk. With slogans like that, you learn to hate people.”

Self-blame: The society that has been de-solidarized

The image that people in work have of people without work is widely shaped by prejudices. In a society that is increasingly becoming less and less solid, those affected are often accused of being lazybones and parasites who did not want to work at all and who made themselves comfortable in the proverbial social hammock at the expense of the general public. In addition everyone is to blame for itself, if its life sketch fails.

Is that really the case? The documentary photographer Thomas Klingberg and the journalist Frank Menke accompany people who no longer have a chance of being placed on the regular job market. The fact that they have fallen into such a crisis often has to do with a personal break in their lives – or with several breaks in their lives. However, it is not only breaks in their lives that can be found in the biographies of many long-term unemployed people. There is also the desire for departure. There is the longing to lead a self-determined life beyond Hartz IV and Jobcenter again, to experience appreciation and appreciation.

“I took a wrong turn at some point. If I could wish for something again, it would be a trip to the sea. To the North Sea. I’ve always loved the sea, as well as dolphins, I’d love to see them. I haven’t been on holiday for 28 years.”

The Job Centres cooperate with numerous social organisations in order to stabilise the long-term unemployed in their life situation and bring them back to a working life. The “Upcycling” project run by renatec GmbH, a charitable Düsseldorf-based company, provides a framework for this. There, Hartz IV sufferers create something new from discarded everyday objects, thus giving seemingly useless things a new functionality and regaining a more positive sense of self-worth. The workshops saw, hammer, sand, polish and paint. It is taken apart and assembled. Something new emerges from something old – an excellent analogy to the lives of these people in this measure.

“When one of my sons died, I fell into a very deep hole. For years I was stuck in it. Until one day I said to myself: That’s it! I was too bad to be so broken.”

The Düsseldorf photographer Thomas Klingberg literally gives the people working on the upcycling project a face – in black and white as well as in colour. His photorealistic portraits reflect their fears, their sadness, their anger and despair, but also their hopes and desires. In addition, his documentary snapshots refer to the everyday working life and the abilities of these people, for whom water is not up to their neck, but up to their crown – and who therefore practice the art of breathing under water.

The Düsseldorf journalist Frank Menke gives a voice to the people working in the Upcycling project. He documents their ideas of esteem and dignity, their ruptures in life, how they experience their existence in the Hartz IV cosmos, how they deal with discrimination, what they draw hope from, what encourages them, what they dream of and what they want to achieve in their lives. His texts see themselves as a corrective to the lastingly cultivated social prejudices on the subject of long-term unemployment.

About breaks and new beginnings
Texts and photographs
Opening: 14 September 201